Busy, busy week! After getting home last Saturday from our winter's journey one would think that we might stay home for a spell but that was not the case. Last Sunday we drove down to northern Virginia to visit Todd, Beth and our 3 grandchildren- Maddy, Anthony and Parker. We had a nice visit and dinner together at a local restaurant. We also got our mail that had been forwarded to them. As the week started we got back into our routine of being home- going to the Senior Center in the mornings to workout, our daily housekeeping chores and Tom's runs to the fire station for calls. Friday a wet rainy day we loaded the motorhome up again and took off for a short trip to Walkersville, Md.- 18 miles away. The Maryland Good Sam's had their annual President's weekend and since Tom is president of our Traveling Americans Good Sam group he was expected to be there. There were about 18 RVs on the site. Linda and Woody Woodruff from Traveling Americans also attended which we were glad to have their company for the weekend. Saturday morning we, along with the Woodruffs, helped the Gerri Watkins with preparation of sausage and pancake breakfast. After breakfast there was a business meeting. For dinner there was a pot luck meal with lots of good food. And then this morning we packed up and returned home in time to change clothes and go to church. We plan to stay put for a couple of weeks now.
Posted by Leah at 5:48 PM

Friday morning a little past 7am the Newmar tech was at our motorhome door ready to take it for its water testing.  Tom and I went to downtown Nappanee for breakfast and then returned to the factory customer service center to wait for the return of our motorhome.  It wasn’t too long before the motorhome was returned and we were able to pay our bill and be on our way.  Thursday evening I question the tech about the charge for the roof leak and was told that there was only a 90 day warranty for a roof, needless to say we were disappointed in this as this was not the service provided by Newmar in the past.  When we paid the final bill our tech said that he further questioned about the roof and since it has not been a year we would not be charged for the roof repair and the inside ceiling repair, this is what we would have expected from Newmar- our faith in the company was renewed.  Before hooking up the car to move on, Tom drove to a propane dealer and had the tank filled.  It has been cold in Nappanee and during the night we keep the furnace on so we felt we were getting a little low on propane.  When he returned we hooked up the car and headed east to Fayette,Ohio, the home of Tom’s sister, Julie and her family.  Just before getting off the turnpike our tire monitoring system sounded an alarm that one of our motorhome tires on the rear duels was loosing air.  After exiting we found a gas station to pull off and Tom checked the tires to be sure there was indeed a problem.  He then asked about a tire repair facility and sure enough there was one (Hutch’s Towing and Recovery) in the opposite direction from which we were headed.   We turned around and a short distance away we found a truck repair facility and immediately someone went to work fixing the tire.  We were back on the road headed for Harrison Lake State Park, a very nice campground that is only a mile or so from Julie and Tim’s.  We got in set up and then Tom found the fixed(?) tire was leaking air at the valve stem extension.  So we tore down and returned to Hutch’s.  Again the tire was taken off the motorhome and the extension was put on before being mounted not afterward as was done the first time.  Back to Harrison Lake to set up again.  We went to Julie and Tim’s had a nice dinner with their family and visited for awhile.  A nice evening of catching up on family news.

Today Saturday we left Harrison Lake continuing on eastward.  It was cloudy most of the way through Ohio.  In Pennsylvania we thought at first the skies were lightening up but then we began seeing some dark clouds.  We stopped at a rest area north of Pittsburgh for lunch after traveling through some rain showers.  Leaving the rest area we again encountered rain showers but as we continued on the rain turned to snow. 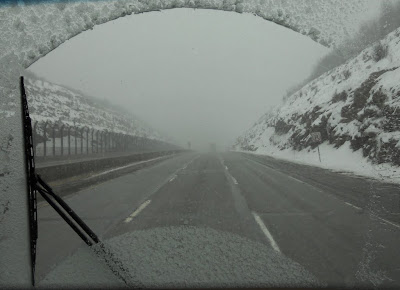 The roads were wet, snow was not sticking to the roads but the hillsides were covered.  The snow fell harder as we traveled on, visibility at times was limited due to the snow fall. 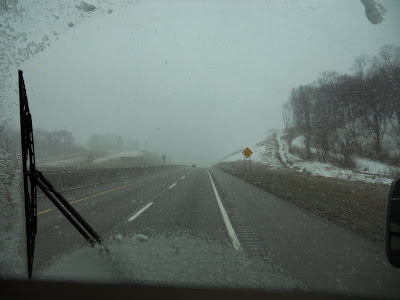 We hoped that when we went through the tunnel in the Somerset area that the snow would be stopped on the other end but that didn’t happen.  Finally the snow turned to rain again and before we hit the Bedford area the sun was shining and continued the rest of the way home.  It was a long trip today, about 500 miles and close to 10 hours, but it is good to be home.  We have driven the motorhome in snow more this trip  than we have all the times before.  I don ‘t think we will be taking this northerly route again at this time of the year if we can prevent it.

Monday morning we left the campground north of Indianapolis and traveled north to Nappanee, Indiana where we settled into “Camp Newmar”.   “Camp Newmar” is a name given to the area at the Newmar factory where Newmar owners can camp while having service work done on their units.  Nappanee is in the heart of the Amish country of Indiana where there are numerous horses and buggies and bicycles on the roads.

Tuesday morning we drove a little farther north to Elkhart.  We had an appointment at Bradd and Hall’s, a business that does rehab work on RV’s, that had replaced our carpeted floor with laminated flooring a few years ago.  An area had become spongy feeling and had a spot that looked like something under the floor was pushing upward.  After the technicians checked the floor it was found that a subfloor bolt was protruding.  They were able to cut the bolt and the flooring was able to flatten out.  While waiting around for the work to be completed we checked out the furniture and window shades in the show room.  We replaced our old worn recliner chair with a newer one.  The window shades we were looking at (MCD) could not be fitted under our wood valances so we will stay with the pleated day/night shades.  After a lunch at Olive Garden we returned back to Nappanee.

Wednesday we stayed at the motorhome most of the day.  Time to catch up on laundry, housekeeping and maintenance.  There were a couple of malfunctioning lights that Tom replaced.  We were scheduled for some factory work on Thursday.  We did take the factory tour at 1pm.  We had taken this tour previously and were surprised at the reduction of production.  At one time this factory had 20 plus units a day going out the door with about 1000 employees, today there are 3 units a day being produced with 400 employees- but they have continued to remain in business when others in the industry have had to close their doors.

Today, Thursday, we had to be up bright and early.  I heated up some coffee in the microwave and noticed that the turntable was not working and there continued to be a strong smell that we had noticed a couple days before coming from it.  After checking the turntable we found the mechanism that turns the turntable had melted off.  Service work starts at 6am and sure enough a little past 6am there was a knock on the door.  We had had our roof replaced May 2010 and had episodes of water leaking through to the ceiling.  Now that the microwave was broken we needed that to be replaced.  The shower drain was in need of being replaced and a panel door needed to be repaired.  The motorhome was taken into the service area and we went to a local diner for breakfast.  We returned to the service center and waited until a technician came to give us an estimate and reported that the leak was due to a solar panel(5 watt panel used to charge chassis batteries).  We then drove to some local stores and to Shipshewana to a few more stores and then lunch.  When we returned to Newmar facility our motorhome was parked on the lot.  The repairs had been made, the ceiling had been cleaned removing the water spots, a new microwave had been installed, the shower drain replaced and panel door repaired.  Because of the roof work a water test needs to be done in the morning but we could stay in a little longer, the motorhome won’t be picked up until 7am.

The sun was shining when we got out of bed this morning but it was really cold- temperatures in the 20’s.   Brrrrr- let’s get back to the southwest!  No, we had to keep going east.  The snow that fell yesterday had been a wet snow and then during the night the temperatures dropped causing  icing under the snow. 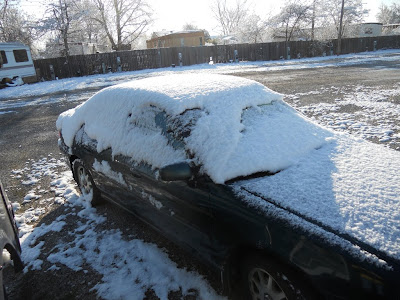 The awning over our slide out had ice under the snow that prevented the slide-out from being pulled in.  Tom used brooms to try to move the snow and ice and finally we got the slide in.  The awning did not coil up as tightly as it should but well enough to travel.  The roads were clear of snow.  The snow along the roadsides hung in the trees and covered the ground most of the way through Illinois. 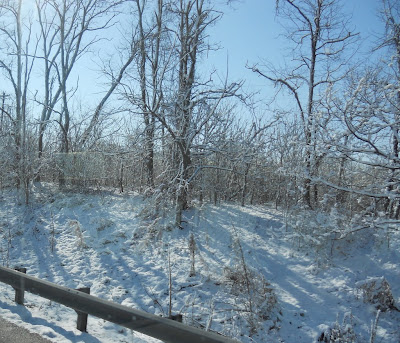 We followed a trucker that had a sign on the back of his truck that he would throw things at tailgaters- we weren’t tailgating but he still threw ice from his roof of his truck. 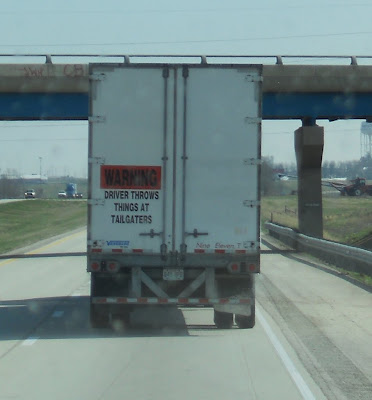 We stopped for lunch in Terre Haute, Indiana at a Mexican restaurant, Real Hacienda, that had very good food.  Tom had carnitas, a pork dish, and I had camarones a la Diablo,a hot, spicy shrimp dish.  We had parked in a vacant lot across from the restaurant.  When we returned to the motorhome after eating we put our slide-out out and then retracted it with the awning coiling up tightly as it is supposed to do.  We are camped north of Indianapolis at Timberline Valley RV Park, just off I-69, a very neat, well maintained Passport America park.  Just before getting to the campground we realized that we had crossed from Central time to Eastern time and lost an hour.