After 1879 miles, a starred windshield and a sopping wet air filter we arrived in Pharr, Texas. We will be staying at Texas Trails RV Resort. 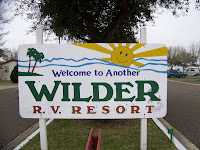 The park is nice enough, but there is one BIG PROBLEM. It is not very pet friendly. We are restricted to a very small area where we can walk Travis.

The following day, I went to the office to find out if there was any place nearby that we could take Travis to for a walk. I was given directions to a municipal park in Edinburg that was about 5 miles from the RV park. What a very nice place it is, plenty of parking and several walking/jogging trails. 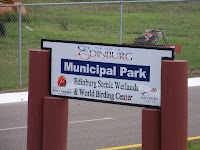 We are not happy that we have to leave the RV Park to walk Travis, but the municipal park make up the this short coming. The park is also part of a series of nine locations that make up the Texas Birding Trail. This area is a big migration flayway for birds and butterflys. 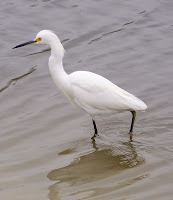 Most, if not all, of the RV Parks in the RGV has many activities to occupy the time of their Winter residents or as we are called "Winter Texans."

As you can tell from the dates, I have not been keeping up with this blog, but I am in the process of trying to catch up to date.
Posted by Tom and Leah Van de Bussche at 10:42 PM

Driving in the Rain

We spent most of our traveling days driving in the rain. On the final travel day, the motorhome was saying enough of this stuff already. It was raining very hard which makes driving a chore.

Our motorhome is a Ford V-10 powered unit. One big problem is it does not like hard rain. Rain gets sucked into the air intake and causes the engine to stumbel and miss. We had the first modification installed to correct this problem, but it was not very effective.

Our next to last night on the road was spent in Victoria, Texas. When I went into the office to register for the night, a man in the office area asked where abouts in Maryland I was from. I told him I was from Carroll County and a little town called Taneytown. He said he know where Taneytown was as he was from New Windsor. New Windsor is about 10 miles from Taneytown, small world.

Anyway, getting back to the water ingestion problem. We were about 50 to 60 miles North of our destination when the motorhome started its stumbling and missing. Leah and I kept our fingers crossed that the missing would not get worse and we would make it to our destination.
To make matters worse, I missed a turn off and was off course. It was decided to continue on South and take a route that would take us a few miles more rather than turn around and find the correct turn.

We called the campground we wanted to stay at for our stay in the RGV, but was told they were full. On to plan B. We called Texas Trails RV Resort in Pharr, Texas and was told they had room for us. So, we go to Pharr.
Posted by Tom and Leah Van de Bussche at 10:17 PM

On the Road to Texas

At 7:30 am we backed the motorhome out of the driveway in Maryland, hooked up the car behind us and began out trip to Texas. Our first night is being spent South of Bristol, Tn. after traveling 409 miles. Gas prices have been lower than Maryland's, but they are still around $2.00 per gallon. We have Wi-Fi at this campground so, We decided to up-date the blog, in case anyone else reads it.

So far we've discovered I left a battery and charger behind for my new digital camera and a gift certificate for Perkins'. If that's all, we didn't do a bad job of packing. If anything, we over pack.

We have been keeping an eye on the weather forecasts for tonight and tomorrow. It looks like we are on the line for rain or snow. We are hoping for rain. We are looking to make it to La. tomorrow if the weather cooperates.

Our plans are to go down to the Rio Grand Valley and chill out for several months. We are looking at staying in the Mission area where we can go birding, hiking and day trips to Mexico and the other parts of the RGV.
Posted by Tom and Leah Van de Bussche at 8:42 PM

Well. Tom made the trip to Ohio on Thursday and returned home on Saturday. While in Ohio he stayed with his brother and sister-in-law, Roger and Cindy. On Thursday evening, Tom and Roger went to their uncle Bob's viewing in North Baltimore. There were many of the same faces that they had seen just six weeks ago at their aunt Liz's viewing and funeral. Sonny and his wife came in from South Dakota and Connie flew up from Texas.

Uncle Bob's death has been hard on all of us. We were hoping that 2007 would be a good year for him and perhaps he could have spent some time on the road with Connie and Ed and Tom and Leah. I guess God had a different plan for him. He knew God and home at last with Aunt Liz.

Tom's mother was able to make the trip to the funeral. Her health has not been the best for quite sometime either. She will be 80 on the 13th of January.
Posted by Tom and Leah Van de Bussche at 8:32 PM

Bad way to start out the new year

Today around 2:oo pm, Tom's sister, Julie, called to tell him that his Uncle Bob had died. Uncle Bob's wife had passed away just before Thanksgiving. We knew he felt a very deep loss with her passing, but did not realize just how much he did. Tom spoke with him last weekend and he seemed to be coming around pretty good. His death sure puts a black cloud over everthing.

Julie also reported Tom's brother, Roger, was admitted to the hospital on Saturday. this was the same day that his stepson got married.

The only real good news was that Tom's mother came home from the hospital on Sunday.

Well it appears we are going to make another trip to Ohio this week for another funeral. Bummer :-(.....
Posted by Tom and Leah Van de Bussche at 7:25 PM