We got underway a little after 9am on Thursday (28) morning and headed south.  With temperatures in the teens and expected to drop even more we were anxious for warmer weather.  We traveled 377 miles to Florence, South Carolina (good ole Florence!) staying at Swamp Fox Campground.  It was cold but more tolerable.
Friday we drove to Brunswick, Georgia, 244 miles.  The motorhome needed a good washing and we had used Blue Beacon Truck Wash previously so we stopped to have that done.  We had hoped to go a little further but when we tried making reservations earler in the day at campgrounds there was no vacancies.  Golden Isles RV Park had 1 sight available when we called so we grabbed that up.  The truck wash and RV park are both at the same exit off I-95.  Traffic was heavy most of the way from Richmond, Virginia down.
Saturday (30), we continued on for another 212 miles to Alliance RV facility in Wildwood, Florida.  This facility is just outside The Villages and would be doing some further repair work on the motorhome after our incident in Florence, S.C.  This facility has a nice campground, water and electric with dump station, paved sites that we were assigned a site to park the motorhome.  After cleaning out and loading up the car we went home.  Temperatures here were in the upper 60's with beautiful bright sunny skies.  How nice to be home!
Posted by Leah at 2:18 PM

Tuesday, 19th, we left Gettysburg traveling 118 miles to Stafford, Virginia, to our son, Todd, and his wife Beth's home.  We are able to park in their driveway which makes it very convenient.  The first several days were fairly pleasant with temps dropping into 40's or 30's at night.  We celebrated Beth's birthday on the 23rd and Christmas on the 24th as Todd had to work on Christmas day 24 hours.  Our youngest grandkids, Parker (8) and Gabi (6), spent some nights with us.  In fact Gabi was with us every night and Parker whenever he could be away from his video games.  Our oldest granddaughter, Maddi, (18) spent Christmas with her mother's family but then after Christmas she went with us for a day of shopping, this is how we deal with her birthday and Christmas to be sure she gets things that she will wear or use.  The night before leaving the whole family went out to a nearby Mexican restaurant for dinner, this included Maddi and her boyfriend and Anthony (18) and his girlfriend.  It was a nice time visiting but the temperatures had been steadily dropping throughout the week.  On Thursday morning (28) it was 15 degrees when we left.
Posted by Leah at 1:53 PM

Christmas has always been a time for being with family and friends and this year was no exception to that.  On Saturday, 16th, we drove to Ellicott City, Md. to my niece's, Robin and her husband, Bob's house for a family get together.  We had a wonderful dinner of ham and steamed shrimp, salads, macaroni and cheese plus and then later homemade ice cream, coconut cake and cookies.  It was a very nice day of being with family.  Gifts were exchanged and kids played together.  Todd and his family were there and since Todd and Beth had another evening party to go to, Parker and Gabi came back to the motor home with us to spend the night. 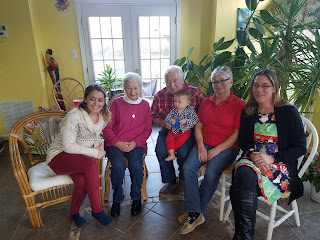 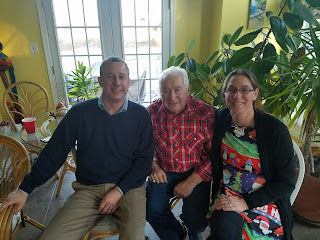 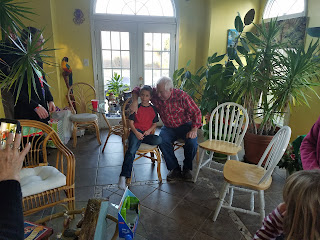 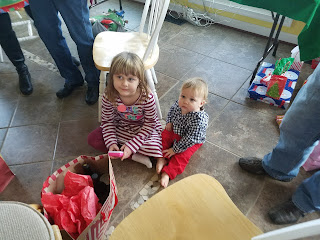 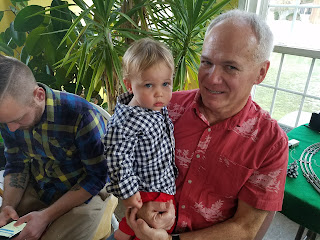 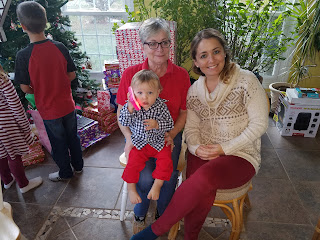 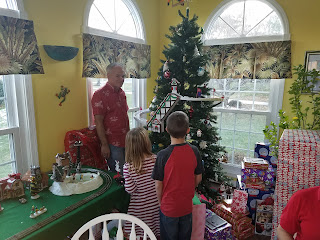 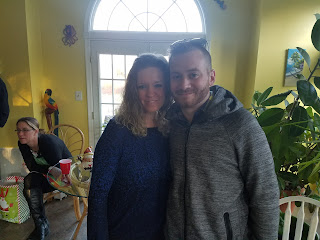 Sunday, 17th, was almost nonstop from morning to night.  We met Todd and Beth near Frederick at a Wegman's grocery store at 8:30am to get the kids back to them to take home.  Tom and I then headed to Taneytown to get some air in the Jeeps tires.  We thought we had some time to kill so we stopped at a Dunkin Donuts to get a cup of coffee.  We were biding time until church time at our former church which was 10:30 when we had attended prior to moving to Florida.  While drinking our coffee I checked on the church's website and found that the service time was 10 am   and it was a few minutes before 10.   We hurriedly jumped in the car and drove the several miles to church arriving after the service had started.  It was so nice being at this church service and seeing our former church family.  In the afternoon we drove to Westminster to pick up my aunt Dotty Frock, my dad's 88 years old sister, to take her to Rock Salt Grille in Westminster where Larry, my brother, and Joanne met us for dinner together .  After dinner, Tom and I took aunt Dotty home and spent a little time visiting before moving on.  From Westminster we drove to Kingsdale area of Pennsylvania to visit Miny Cluck, a gal that worked with Tom in his working years, and her husband, Len.  We had a nice visit with coffee and desserts. Whee, were ever busy on this day!

Today, Monday 18th, we went to Emmitsburg, Md. where we met up with a longtime friend, Peggy Conrad and her daughter, Tammy, and Larry and Joanne for lunch at Carriage House Restaurant. 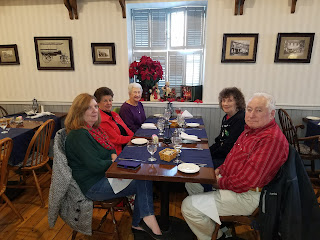 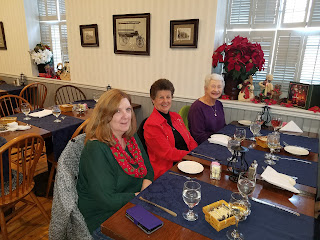 Peggy, Larry and I grew up together and our families were together every year at Christmastime that we could ever remember.  Peggy's husband, Grover, had just passed away about a month ago.  We always enjoy bring together catching up and reminiscing.  After about 3 hours we said good bye and went our own ways hoping to be together next year. After these 3 busy days we will be leaving this campground tomorrow to go to Todd and Beth's .  The weather has gotten a little warmer each day, today temps were near 50 degrees and should not fall below freezing tonight but the skies have been gray and dreary most of the time.
Posted by Leah at 9:56 PM

On Monday, December 11, we had the motor home packed up and were on the road by 9am.  It was a cold morning with temps about 39 degrees, cold for Florida.  We drove to Brunswick, Georgia where we had the motor home serviced at a Speedco.  From there we drove over to Golden Isles RV Park, an hour a mile away, to spend the night.
The next morning, Tuesday, December 12, we were underway by 8:15am continuing our travels up I-95 toward the Virginia, Maryland and Pennsylvania area of our family for Christmas.  As we were motoring through South Carolina about 1:15pm in the Florence area Tom suddenly was seeing lights on the dashboard lighting up and flashing.  About the same time a passing trucker tooted his horn and motioned toward the back of the motor home.  Tom immediately pulled over on the shoulder of the road and got out to assess the problem- steam was pouring out the back.  He felt that it was a fan belt issue and we needed to call for road assistance.  Our service is through FMCA.    It was 4:15pm until a tow truck appeared and the driver after looking at our coach didn't feel he could tow us without frame damage.  He called someone else that he thought could do the tow.  When our road assistance called us saying the tow company said we declined their services we realized that nothing else was in the works to get us towed and we explained that we had not declined but the tow driver didn't think he could safely do the job and we did need a tow.  Finally, we were called saying there was a mobile mechanic that would be out.  Jamie, the mechanic showed up about 7pm and after assessing the problem felt the serpentine belt broke because the air conditioning pump seized up.  We had a belt that had come with the mh that was on the motor originally but Tiffin added the a.c. compressor needing another size belt.  This original belt should have worked by passing the a.c. compressor but it didn't.  Jamie, after a couple hours said he would return the next morning at 8am.  We spent the night in the motor home on the shoulder of busy, heavy truck trafficed 1 95.  Those trucks passing by caused the motor home to sway back and forth.  We were so uncomfortable along this busy road that we went to bed and slept as best as we could fully dressed.  A state trooper did show up around midnight wanting us to move further off the road which was not possible.
December 13, Wednesday, mechanic Jamie showed up about 9am.  Tiffin had been contacted about the serpentine belt and clarified that the belt that we had was the correct size according to their records but it definitely did not fit.  Finally about 10:30 we thanked Jamie for his service but we wanted to get the motor home towed to a safer place as we did not want to spend another night on this road.  Road assistance rounded up Sheppard towing that showed up about 1:30pm.  Albert, the driver, worked hard to get the motor home situated on the tow truck and about 2;30 was towing to Blanchard Machinary, a business that Tiffin said was an authorized power glide service center.  (Blanchard denies that is the case anymore but agreed to work on our motor home if we towed to them).  Blanchard was just a couple miles away.  Once the motor home arrived there mechanics were quickly checking out the problem.  Albert, the tow driver, noticed a couple of helper springs were broken in transit and said he would be replacing them as soon as he could get them, hopefully the next day.  We gathered a few things together- clothes, toiletries and our computers- and went to a Hampton Inn for the night.
Thursday, 14th, after a good night of sleep we had breakfast and ran a few errands and then waited.  We hoped we would be able to leave this day but reserved the possibility that we may need the room a second night.  We did not have to check out until 12noon.  At 11:20am we got the call saying the work was completed.  Tom called the tow company and was told the springs had come in and Albert would come over to Blanchard's to replace them.  By 1pm we had the repairs completed and we were on the road heading further north.  We travelled 204 miles to Roanoke Rapids and the RV Resort at Carolina Crossing.
Now we are up to today, Friday the 15th of December.  Early this morning Tom detected some problem with the heat pumps, furnace and the house batteries.  He located a service center in Ashland, Virginia.  So we found our way there and RV Services agreed to do diagnostic testing about 10:30.  So we waited in the waiting area feeling really low and discouraged about RVing.  A few minutes before noon the motor home was pulled out on the parking lot and the mechanic came in to say they found the problem which was a loose battery cable.  We were on the road by 12:30pm.  We continue on well until we came to the Leesburg area where there was an accident and we crept for quite sometime.  We hit snow and then sun was shining when we got north of Frederick.  We arrived at Artillery Ridge campground at 4:35pm, hooked up the electric and went to dinner at Montazuma's restaurant.  So glad to finally be here safely.  It is cold with temperature in the 20's but it is to get warmer the next several days, we sure hope so.
Posted by Leah at 10:52 PM