The Beginning of a New Adventure

A week ago, June 18,2008, we left Taneytown to start a new journey.  Traveling through the mountainous regions of Pennsylvania and Ohio, the skies were threatening rain most of the day but only had a few drops of rain.  Our first night was spent in Newton Falls, Ohio not far from the Pa./Ohio border at Ridge Ranch Campground.  Entering the campground the grounds were very attractive with ponds and green grassy areas but going back to the campground area was less attractive.  There were many permanent sites that were not well kept, the roads were gravel and our campsite had little grass.  When Tom attempted to raise the antenna he felt something hit the antenna and quickly pulled it back down, there were electric support wires strung throughout the campground that were low enough to prevent our antenna from being raised.  So we spent the night quietly reading!  It would have been more trouble than it was worth to complain and move to another site for one night.

The next day we traveled on west to Harrison Lake State Park in northwestern Ohio.  We would stay here from Thursday until Sunday.  Tom's sister and family lives just outside the state park which makes this a real convenient campground for visiting family.   Harrison Lake is a very pretty state park- well maintained campground and a nice lake.  The campground has 50 amp electric but no water or sewer hook-ups.  We had to replenish our water supply before setting up our campsite.  Friday we spent visiting and preparing for a family reunion that was being planned for Saturday.   After a trip to a grocery store and stop for lunch, I baked a cake and  made a salad.

Saturday the Phillips family assembled in a pavilion that had been rented for the reunion.  As always with this family there was food for an army.  As we were getting ready to eat the skies darkened, we had a brief shower, the temperature dropped to a cool jacket-needed temperature.  After eating, it really began to rain and the wind started blowing sweeping the rain through the pavilion.  At this point the food was gathered up and loaded into cars causing some to go home and the remainder to go to Tom's sister house for the rest of the day.  In spite of the weather, it was nice to be with relatives that we had not seen recently. The weather did clear up in the evening.

Sunday morning we were on the road by 7:10am.  We knew we had a long trip ahead of us to through Indiana to southern Illinois.  We were due to be in Du Quoin, Illinois on Monday morning between 7 &9am.  So we drove 364 miles to Lakewood Campground in Effingham, Illinois.  We arrived about 3:15pm which gave me time to get our dirty clothes washed before going to the Newmar International Rally in Du Quoin the next day.  Sometime doing the evening we realized that we had crossed into Central time giving us an extra hour.  We maintained our Eastern time schedule and when we got up at 5:15am(ET) on Monday morning it was really 4:15am(CT ).  By 5:00am(CT) we were on the road arriving at the state fairgrounds in DuQuoin by 7:10am.  We were parked and set up by 8am and then we ate our breakfast.  We do have 30amp electric and water but no sewer.

Monday was the first day of the rally but we were some of the last to arrive.  Early arrivals are allowed to come in as early as Saturday and the majority do arrive on Saturday and Sunday.  Since we knew we would be assigned a specific time slot to get in we knew we would not be able to get in before Monday.  We had hoped for a little later time slot than the 7-9am but we really have no choice in that.  We got registered and then chilled out in the afternoon.  The opening ceremonies that evening started the rally off.  During this ceremony flags from each state are carried into the assembly and displayed.  Tom and I had the honor of carrying the Maryland flag, of course, we were the only ones from Maryland in attendance.  Entertainment that evening was a couple, The Rivoli"s, that sang a variety of songs.

Tuesday started with a continental style of breakfast.  Then the seminars, display motorhomes/5th wheels and vendor were opened.  We checked out the vendor area and went through the new display units.  We were not impressed with the new units.  The number of vendors seems to be less than in previous years.  We each attended seminars of our choosing,  Tom more than me.  There always seem to be more technical seminars that are of more interest to Tom.  A dinner of baked chicken and rice with other sides was served in the evening.  The entertainment for this evening was a group of 4 brothers, The Marlins, that performed with a variety of instruments and singing.  Very entertaining!

Breakfast will be served every morning through Friday.  After breakfast on Wednesday, Tom and I attended a couple of seminars together and then went to the vendor area.  One of the seminars we had attended was about water softeners.  We know that we often get into areas of hard water which has caused some deposits in our shower stall so we decided to purchase a water softener system to use.  At lunchtime, George and Pat Callender picked us up and we went out to lunch at a local restaurant.  Another couple joined us also. After lunch we attended another seminar and then went back to the motorhome.   Since it has been increasingly warmer everyday ( upper 90's today) it fells good to get into the air conditioning.  The 30amp electric that we have here is good enough to handle 2 air conditioners as long as we don't run anything else on electric.  There was no dinner or entertainment scheduled for this evening so we ate in, took Travis for a walk and watched TV.

Posted by Tom and Leah Van de Bussche at 4:10 PM

Thursday, June 5, 2008 we traveled to Kinzer, Pa. for a weekend with the Traveling Americans. Kinzer is a small community in Lancaster County, the Amish area of Pa. The campground, Roamer's Retreat, was easy to locate along busy Route 30. The weekend for the T.A. group starts on Friday but like most of these weekends there are usually several that arrive a day or 2 earlier. So Thursday evening most of us that were on the premises arranged to go out to dinner together. Stolzfus Farm Restaurant was the chosen place because it looked to be relatively close and not on Route 30. Well, we indeed took the scenic route but eventually got to the restaurant. The meal was served family style- 3 meats, fried chicken, ham loaf and sausage with several sides and a variety of desserts for about $17.00. The food was good and too much was eaten but a good time was had by all. When we returned to the campground an Amish lady and her 2 children were going through the campground selling strawberry jam and strawberries. We bought the last quart of strawberries that they had and then enjoyed sharing with the other folks later that evening. The berries were really sweet and flavorful.

Friday in Lancaster County is the Green Dragon Market day and when we are in the area we usually have to go and this Friday was no exception. The big item was strawberries as they are now in season in the area. We bought some fresh produce. From that market we went to a commercial market called Smart Shoppers that we had read about in our local newspaper. It handles discontinued items or surplus items at a very reasonable price. We were pleasantly surprised at the neatness and cleanliness of this type of store. We bought items that we needed paying attention to the expiration dates. We lunched at the Oregon Pike Dairy restaurant. We chose not to go out for dinner, eating-in, instead.

Saturday morning started early for us. Tom had arranged as a Mother's Day present to me a hot air balloon ride for this morning along with Bruce and Cricket McGinnis. At 4:30am Tom had to call to check that the weather would allow for the ride that was scheduled for 6am. At 5:30am we left the campground and went to Bird-In-Hand, a town, to the field that the ascent would be done. Clouds were hanging low and as it became foggier the flight was delayed. 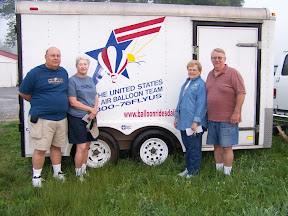 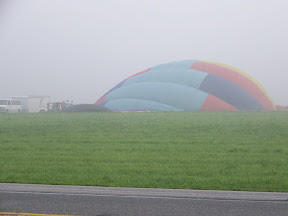 About 7am we along with the McGinnis' and their daughter and grandson decided to cross the road to a restaurant for breakfast. After eating and returning to the field the balloon was inflated and we were going to be on our way. The McGinnis' daughter and grandson were along to follow on the ground and to take pictures but our pilot said he had room and would allow them to go along. The daughter was thrilled, the grandson reluctantly came along. 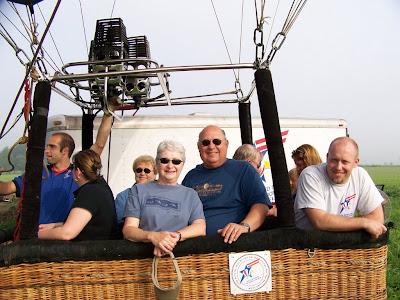 We had 8 passengers plus the pilot on board, Tom and I, the McGinnis 4, the pilot's wife and a young man that was going to parachute frome the basket. It was not real clear out but was clearing as the time went on. Another smaller balloon also ascended shortly after our balloon and travelled a short distance with us. 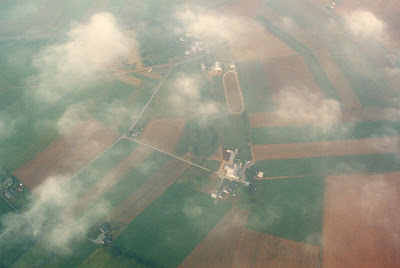 Since we had a parachutist on board the pilot had to take the balloon up higher than usual to a little over 5000 feet- a mile high! When we got to that height the parachutist donned his parachute, climbed overboard and pushed off. It was breath taking to see that youngman falling toward the earth. He couldn't get that chute opened fast enough for me! We lost sight of him after his chute opened and he was sailing through the lower winds. 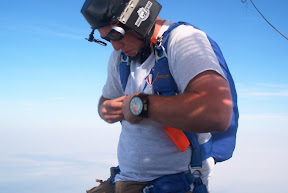 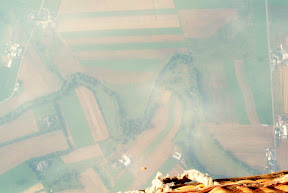 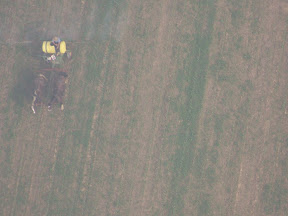 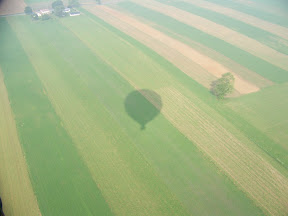 As we drifted along, we appreciated the neat and tidy Amish farmlands. Men with their horses were working fields, women and children were tending neatly planted gardens. It was a very relaxing, calm ride. The blast of the propane heaters felt very warm but after the initial heating of the balloon the blasts were short. 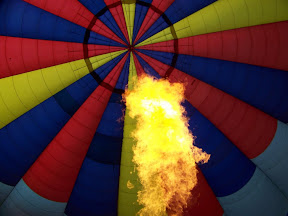 There is no control for where the balloon will travel, it all depends on the winds. A chase unit was observed keeping track of our travels. 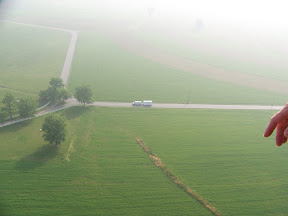 It was important that our gondola landed near a road because of its size and weight and the pilot did not want to land in any field that could have crops damaged, an alfalfa field was good. Our landing occurred on the edge of a cornfield next to a road. The balloon actually had to be brought down across the roadway which stopped traffic briefly. 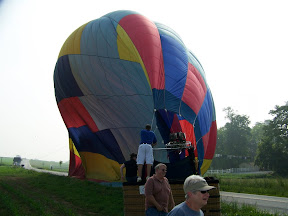 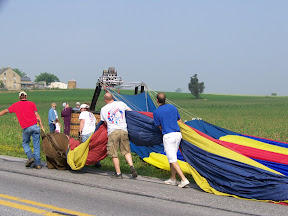 After getting the balloon and gondola loaded in the trailer we all loaded into a van and returned to our starting point for a toast with champagne and orange juice. A great trip! 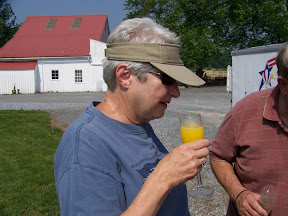 Saturday afternoon we spent in the air-conditioned motorhome resting. For dinner we joined the other members of our group for a potluck meal. Afterwards we gathered around a campfire (heaven knows we didn't need the heat) socializing until the mosquitos drove us inside.
This morning again the group gathered for a potluck breakfast followed by a short meeting. Afterwards those of us returning home packed up and headed home. Several others decided to stay a day or 2 longer. Unfortunately, one gentleman developed some heart problems early Friday morning that landed him in the hospital for the entire weekend and was not to be released until Tuesday so his wife had to remain at the campground and others were staying to be with her.
Posted by Leah at 5:24 PM