Memorial Day Weekend- It's the beginning of the summer season and the beginning of a busy season for us. This weekend started on Thursday, May 22, 2008 as we took the motorhome 26 miles to Frederick, Maryland to the Maryland State Samboree at the Frederick Fair Grounds. We had very little time to spare getting checked-in and parked as we were scheduled to go on a tour of the National Fire Academy in Emmitsburg, Md. at 11:00am. The tour started by the group going to the dining hall for lunch. For $6.38 we were able to eat all that we so desired from a hot food line, a salad /soup bar and dessert table, what a deal! After lunch we toured the grounds. A memorial to Fallen Firefighters honors those firefighters that lost their lives in the line of duty. Each year in October a weekend of honoring these firefighters with special services and programs is held.


A new sculpture, "To Lift A Nation", depicts 3 firefighters raising a flag after the 9-11 tragedy. 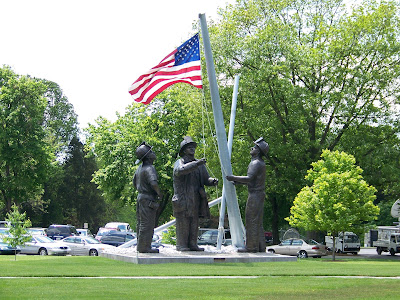 The Academy has about 400 students on campus much of the time teaching already trained firefighters skills to do their jobs better. Classes are 1 or 2 weeks long. The campus of the Academy was originally a Catholic girls college, St. Joseph's College. After the college closed in the 1970's, the federal government bought this property to be used as it is today. Because the campus is on the National Historic Register, the religious symbols as crosses can not be removed. 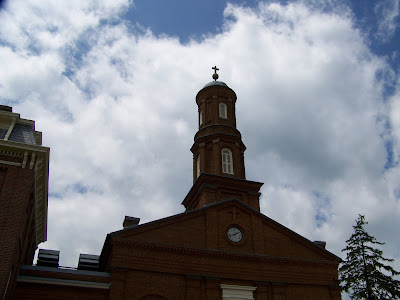 Friday morning, Tom, Ed Perry and Bruce McGinnis went to play a round of golf first thing in the morning. Travis and I stayed at the fair grounds and walked around seeing other people and dogs and the vendors that were set up. In the afternoon, we went on a walking tour of Frederick led by a Good Sam couple. It was a beautiful day for a walk about the city. Walking along Carroll Creek we stopped and marveled at a painted bridge that looked like a stone structure with ivy growing on it. One had to rub their hand across the "stones" to realize it was painted and not real stones. Many stones had symbols or scenes painted on them. There were several painted areas that appeared to be recessed structure in the wall with statues. A grated gate with a little bird sitting in the grates looked as if you should be able to open the gates and walk through. This was quite a work of art! 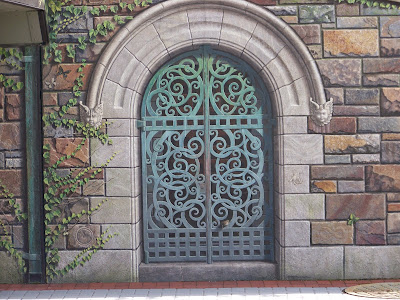 The artist last name was Cochran and there are other examples of his artwork throughout the downtown Frederick area. The church spires for which Frederick is known was pointed out. The county office buildings and city office buildings were also seen. As the tour was moving on to the Shab Row area of little shops, Tom and I went a different direction to stop at our favorite restaurant ,La Paz, for a refreshing Margarita and chips and salsa.
Saturday was spent at the Samboree. Tom attended a seminar . In the afternoon we watched the "parade" of the various groups depicting the theme of "Hometown Heros".

It was just before the parade that I received a phone call from Mom saying that our dear sister-in-law, Janie Little, had died. Six months ago she suffered a stroke and had never recovered from that to be able to go home. At this point we decided that we would leave the Samboree a day early.
Posted by Leah at 8:33 PM

We travelled to Houston, Delaware to G & R campground for a weekend outing with the Travelling American Good Sam Chapter. There were 9 units in attendence. The nice thing about camping at this campground is that meals were included and I did not need to prepare anything. The cost was $150.00 which included 2 breakfasts, 1 dinner and 2 nights of 50 amp. full-hook-up camping. The meals were very good. Breakfast on Saturday morning included bacon, scrapple, sausage, eggs, pancakes, grits, fried potatoes and toast. Sunday's breakfast consisted of oatmeal, pastries, fruit, hard-cooked eggs and toast. Dinner Saturday evening included baked chicken, fried chicken, fried fish, steamed shrimp, macaroni & cheese, green beans and bread pudding for dessert.
Tom and I drove down to Rehobeth on Saturday and Sunday. Saturday we spent time shopping at the outlet stores. The day was chilly and gray, a good day for shopping. Sunday we took Travis with us. We stopped at a store, Critter Beach, which Travis was allowed to go into and Travis got a new harness. Dogs were not to be on the boardwalk, although there were numerous dogs out there, so we just walked around the stores along the street. It was a beautiful sunny day so we found an outdoor cafe where we were able to get lunch with Travis sitting under the table.
We did stay an additional night, Sunday, along with 2 other couples from the T. A. group. On Sunday evening we all sat around a campfire for a couple hours enjoying some conversation.
Posted by Leah at 9:43 PM