We signed up to go on the Great Ocean Road tour today, an optional tour.  By 8am we had been picked from the hotel and taken to a central area to be assembled with folks from other hotels going on this tour.  The Great Ocean Road is a coastal road south of Melbourne. 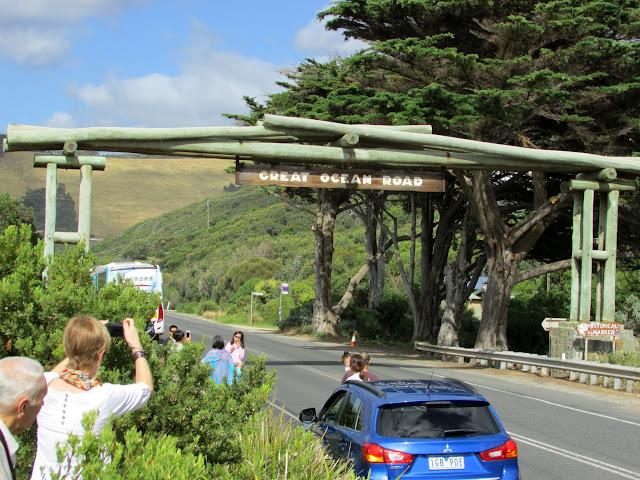 This area along this road had communities that most of the houses were vacation rentals.  The views along this road were beautiful with sandstone cliffs, sandy beaches and blue water. 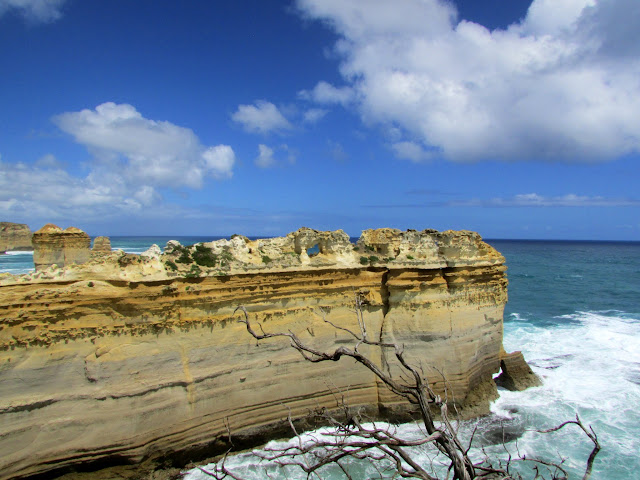 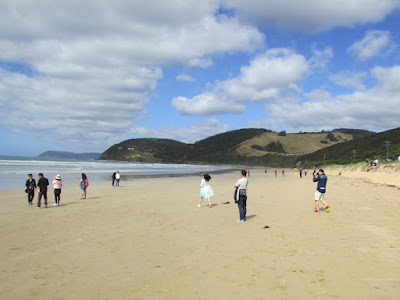 We made several stops along the way.  At one stop just passed an area that had a forest fire we saw a koala sound asleep up in an eucalyptus tree, koala are nocturnal. 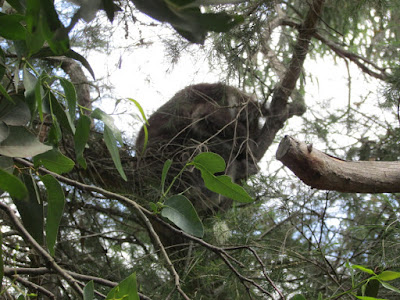 There also were king parrots that would land on people that held out hands with pumpkin seeds. 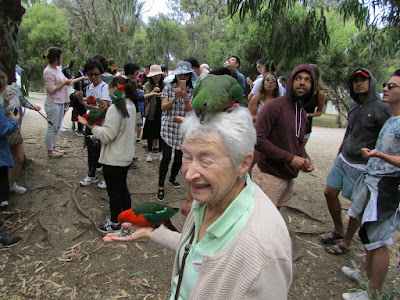 A kookaburra bird was also heard then seen sitting on utility wires.  An area called the 12 Apostles  because of the sandstone formations that were a result of the ocean wearing away the sandstone was very scenic. 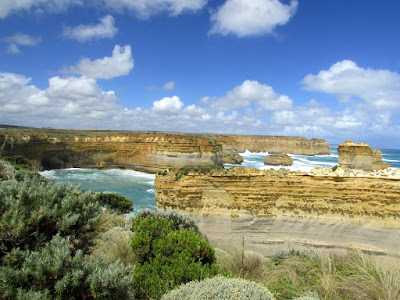 We had lunch at Apolla Bay, a small area of several restaurants and a few shops.  On the trip going back to Melbourne we passed many farms of either dairy cattle or sheep.  We were back to the hotel about 8:25 pm.  A long  enjoyable day of sightseeing along the coast.
Posted by Leah at 6:17 AM

This blog entry is the beginning of our trip to Australia and New Zealand.
On Friday 27th we were picked up at our house at 11:05 am and transported to Brownwood town square.  At 11:45 am we took a shuttle from Brownwood to Orlando airport.  About 3:20 pm we were on a plane to Dallas, Texas.  We landed in Dallas about 5:30 pm and had about a 3 hour lay over.  During this time we grabbed a bite at a pizza restaurant.
At 8:05 pm, central time, we were boarded on a huge Air Bus 380, a 2 level aircraft with 2 aisles and ten seats across. 3,4,3,  to Sydney, Australia.  We were on the lower level, coach class.  Luckily for us, we were on a side with 3 seats of which the third seat was vacant.  The plane had a wide variety of movies, music and T.V. shows that was available on individual screens.  Blankets and pillows had been distributed before we boarder the plane.  We were going to be flying almost 17 hours.  We were served dinner of chicken, peas and rice and mango cheesecake for dessert about an hour after take off.  The main lights were then turned off.  Tom and I watched movies or read until we were sleepy or fell asleep.  We would sleep a little and wake up to watch movies or whatever hour after hour.  Believe me, it was along night.  About 2 hours before getting to Sydney we were served breakfast of scrambled eggs with tomato, mushrooms and peppers, potatoes and a muffin.  Finally about 20 minutes after 6 am Australian time we landed in Sydney.
Even though our luggage was tagged to go to Melbourne, we had to claim it in Sydney our entry point into the country. Of course, it seemed as if we had to walk miles to get to the gate of the departure for Melbourne.  But first we had to get our luggage on the conveyor to go to the plane and again we had to go through security check.  Well, Tom had something in his carry on that looked suspicious and finally it was discovered to be a harmonica.  We were to be on a plane to Melbourne at 7:30 am and all the hassle was eating up time..  It was after 7:30 when we got to the gate and boarding had not started but shortly  afterward it did.  The flight to Melbourne was about an hour.
After claiming our luggage we had been met by a representative from Trafalgar, the tour company.

We were put in a shuttle and sent off to the hotel we would be staying at for 3 nights, Crowne Plaza.  And our room was not ready.  Bummer!! The date was now January 29, 2017- in our travels we crossed the International dateline and lost 1 whole day.
After walking to a nearby commercial area along the Yarra River and getting a bite to eat, we returned to the hotel and our room was now ready.  In the evening we had a scheduled meeting at the hotel with our tour director, Dave Overton.
Later we walked a short distance to a tram station and boarded the Colonial Tramcar where we were served dinner while the tram toured the city.

The next day, January 30, we had a private walking tour with our tour director, Dave, in Melbourne.  Melbourne is unique with its many laneways (alleys that have shops and small cafes, some with covering overhead).  There is also an underground tunnel that leads to the train station with cafes and shops.

Later in the day we were on our own to do whatever, Tom and I walked to the area of the laneways and found a little Italian restaurant where we had paella for dinner.