On Tuesday, December 28th, we left Woodbine, Georgia and within a short time were in Florida.  The sun was bright but it was still chilly.  Temperatures were in the 20’s when we left Georgia but the warmth of the sun could be felt.  Travelling down Route 95 we decided to stop at the San Sebastian winery.  We had stopped here before and like the wines of this winery.  After taking part in a wine tasting we purchased some wine, ate a light lunch in the motorhome and then continued our travels.  We had reservations starting the 29th at a campground in Clermont so Tom called asking if possible could we come in a day earlier which was granted.  We spotted a restaurant prior to getting to the campground, Oakwood Smokehouse and Grill, in the Clermont area.  We had eaten and enjoyed the food at this restaurant in another town on a previous visit to Florida.  So that is where we had dinner and we were not disappointed in the food.

Wednesday morning was still cold (upper 20’s) but warmer weather was on the way.  Today was Tom’s birthday, 65 years old.  Todd, Beth, Maddy, Anthony and Parker were flying down to Orlando on this day.  We transported a large suitcase full of their clothes to lessen the stuff that they had to bring.  In the afternoon we drove to the Holiday Inn that they were going to be staying to await their arrival.  Through text-messaging we learned that their plane was an hour late leaving the Washington area but they eventually made it.  Parker had been really good on his first airplane ride so we were told.  I had made reservations several weeks ago to celebrate Tom’s birthday at the Boma Restaurant at the Animal Kingdom Lodge for 4:30pm.  Tom and I took Maddy and Anthony with us to the Lodge, Todd and Beth with Parker were taking bus transportation.  We arrived at the lodge early so that we could see the animals that are in the grounds bordering the Lodge. 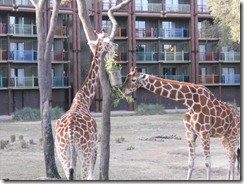 Todd, Beth and Parker were taken to the Animal Kingdom Park and then had to get a taxi to get over to the Lodge.  Finally about 5pm we were all reunited together and sat down to a delicious buffet dinner.  The Boma restaurant food is African and full of tasty flavors.  After dinner we all squeezed into our car and we returned Todd’s family to the hotel and we went to our motorhome.

Thursday morning, the 30th, we all met up in the Magic Kingdom.  Beth had made reservations for a character breakfast at the Crystal Palace. 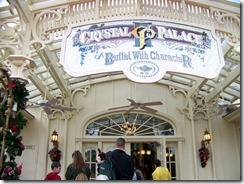 Pooh Bear, Piglet, Eeyore, and Tigger made their rounds as we ate the tasty breakfast buffet. 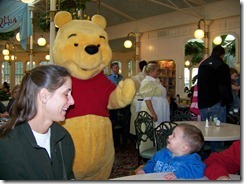 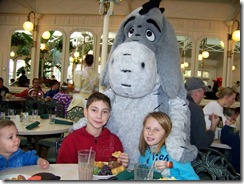 Parker did not like those characters getting too close to him.  We had another celebration for Tom’s birthday- a cupcake and a birthday card signed by the characters were included.  We then walked about the park which was extremely crowded. 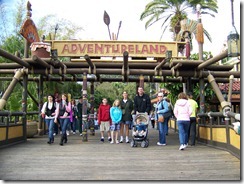 Lines were long with long wait times.  Finally about 2:30pm we decided that had enough of this park and returned to our car.  We took Todd and his family to the Animal Kingdom but Tom and I returned back to the motorhome. (Our little buddy, Travis, has been deteriorating physically as we knew would happen with his health issues we have been dealing with.  We just feel fortunate that we are able to have him with us as we travel.)  It was warmer today as temperatures were in the 70’s.

Posted by Tom and Leah Van de Bussche at 8:40 PM

Christmas eve we left home and began our travels south in search of warmer weather.  Our travels on this particular day was short as we only went as far as Stafford, Virginia to spend Christmas with Todd, Beth and Parker.  Maddy was spending Christmas with her mother and Anthony was with his dad.  We camped at Aquia Pines Campground which is about 5 minutes from Todd and Beth’s.   On Christmas eve we ate dinner together (cream of crab soup and ham sandwiches) and then enjoyed birthday cake  in celebration of Beth’s birthday on the 23rd.  Christmas Day started with breakfast of chipped beef gravy, biscuits and bacon.  Gifts were opened by everyone, Parker needed some help but was getting the hang of it.  The opening of gifts was so exhausting that we all fell asleep when Parker took his nap.  Later in the day we had a wonderful dinner of seafood pasta and salad.  It was a cold, gray day with periodic showers of snow.

Our plans were that we were leaving the day after Christmas to travel further south toward Florida.  The weather maps showed a large winter storm moving toward the east and it was uncertain how far inland the storm would hit.  We were prepared that if the snow was falling when we got up we would stay in the Stafford area another day but it was not snowing when we got up so we started out.  By the time we got to the Richmond area snow was falling but traffic was heavy enough and road crews were busy that the roads were wet, not snow covered.  About 40 miles north of the North Carolina border we were in stopped traffic due to an accident several miles down the road.  It took well over an hour to go 10 miles past where the accident had occurred.  The road beyond the accident area was now coated with snow and numerous more accidents of cars sliding off the road were seen as we travelled on.  In North Carolina  snow continued, the roads had patches of ice and more cars were along the road.  Winds increased in the afternoon causing the heavily snow covered pines trees to blow snow across the roadways causing complete white-outs at times, a somewhat scary experience.  Finally, about 40 miles north of  the South Carolina border we stopped for the night at Sleepy Bears campground just south of Lumberton, N.C.  The snow was still falling but much lighter.

After a cold night we awoke this morning to bright sunshine on the freshly fallen snow.  Trees were covered with snow- a winter wonderland everywhere.  There were some patches of ice on the roads until we got  to the interstate which was clean and dry. About halfway through South Carolina we finally were out of the snow covered areas.  Travel was better today until we were within 40 miles of Georgia where we moved slowly due to an accident for about 10 miles.   We are stopped for tonight at a campground, King George Campground, off exit 7 in Georgia.  It was in the 50’s when we first got to this campground at 4:30pm but the temperature has steadily been dropping and is expected to be in the 20’s tonight.

Posted by Tom and Leah Van de Bussche at 8:13 PM